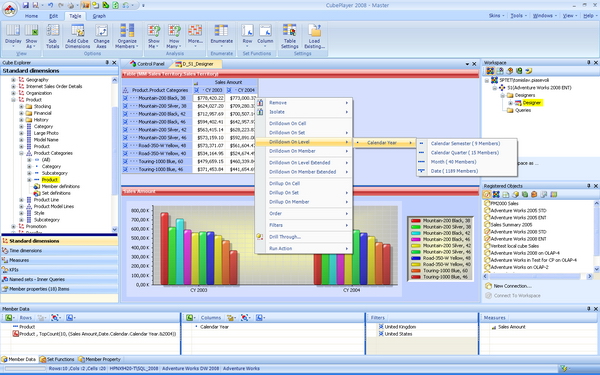 CubePlayer and its advanced Query Designer

CubePlayer is envisioned and made by SoftPro Tetral company, a company with almost 10 years of experience in developing SSAS clients and implementing SSAS projects. Synergy formed by these activities resulted in vast amount of knowledge incorporated in its applications that empowered end users with advanced user interface, MDX query generation, visualization of data and advanced analytical capabilities on grid and graph objects.

Company also pioneered with MDX query parameters in year 2000 with its (currently free) OLAP client for SSAS 2000 - Manager 2000. This version, as well as the next one, were ranked the highest status in the former DWA (Data Warehouse Alliance), among other famous OLAP clients, some of them still live and kicking, some of them bought and in the process of assimilation. Besides parameters, Manager 4 also incorporated several advanced analysis: ABC analysis, Rank analysis, Trend and Forecasting analysis and similar. While some of Manager's innovative features were real jewels, they were much ahead of time and the market penetration was not that great.

With the introduction of SSAS 2005 by Microsoft, SoftPro Tetral decided to start from scratch with a new product - CubePlayer, on a new platform - .NET. All the best tips and tricks gathered from end users were analyzed, mostly accepted, adopted and incorporated inside it. This process is still going on every single day.

From the technical perspective, CubePlayer is a .NET 2.0 OLAP client that works with SSAS 2000-2008 databases and local files. It runs on 32-bit and 64-bit Windows platforms. In small environments it can be installed on desktops. In large environment - on desktops or an application server and then used through remote connections since it supports multi-instance. CubePlayer supports multi-threading and stores all of its objects as XML files. Its modern, up-to-date, multi-language user interface is nothing but pure joy in performance and richness of possibilities when compared to ordinary web based clients or many other Windows (fat) clients. Office 2007 style (ribbon), docking panels (as in Visual Studio) and user configurable environment are additional pluses.

Designed for all categories of end users, it is primarily recognized as an invaluable asset by power users and analysts, since it allows them to save much of the their time needed to create the same analysis using other tools or no tool at all. CubePlayer supports multiple connections to various SSAS databases and local cubes, one-click reports with or without linked parameters, various display modes, drag&drop interface, export to various formats (Excel and SSRS included), dashboards with innovative features like set operations (AND/OR/XOR) on its panels, built-in analyses, exception highlighting, advanced query designer (pivot), advanced MDX editor with Intellisense and MDX behind (view MDX for any object as it changes - live), drillthrough, actions and KPIs, user defined members/sets (built-in and various modes of creating new ones) and much, much more in its intuitive and flexible working environment.

Its true power is its MDX generation/handling engine that allows end users to create various pivots (ad-hoc reports) in its designer without having to learn MDX. So the limited select-all-or-some members from hierarchy, found typically in less powerful clients or add-ins is here extended to a larger set of common OLAP functionality that is otherwise required to be written by professionals in MDX language. Furthermore, users can even paste any MDX inside its Editor, run it and analyze the data without any limitations. CubePlayer makes no distinction whether query originated from its Designer, or it was an MDX aquired from another application (source). And there's a real example of usefullness of such feature, even for beginners, who don't know anything about MDX. CubePlayer can aquire and run MDX from your SSRS reports (including parameters) inside its own environment (grid). That means user is no longer limited with context of predefined report. No, he can add any other dimension/hierarchy/attribute/measure to it, remove some of the existing and redefine it in a completely new report (without ever seeing its MDX!) since CubePlayer allow all that and more for any query. As said before, there's an option to export a query/grid to SSRS, which makes a nice loop back. Just imagine empowering (selected) users with such an analytical environment.

CubePlayer's vision is to provide the end users a rich enough designer, so that they only occasionally have to ask for IT guy's support. CubePlayer continues to advance in this area each day and various new features incorporated in designer can be found in its frequent updates on home page.

All tables, graphs and dashboards are live and support right-click funtions for drilling (down, up, through in many variants), isolation or removal of members, ordering members/hierachies on axis, generating sets from results, predefined measure templates, etc. Much of its functions allow tuple generation for slicing purposes (TopCount's third argument i.e.), a feature much needed in analysis of data. Search for members by name or property will be much useful when dealing with time dimension or large dimensions in general. Graphs and tables can have predefined or user defined styles (font sizes, colors, etc) that are also included while performing export. Furthermore, each query or designer object can have richtext comment that helps in multiuser environment. In that environment, file based repository can be organized through CubePlayer, where end users share their member/set definitions, styles and reports. Many of its features are obtained on click or through the wizards.

Every (potential) user will profit from rich local/online help (with lots of pictures, not just plain text) and video tutorials that provide fast kick-start in multidimensional world.

CubePlayer is very affordable with its one-time prices that drop significantly with packed editions (multiple licences). On top of that, SoftPro frequently publishes free updates, so there are no additional cost, unless arranged so (for education, etc).

If this description provoked some interest in you, click on the company logo below for more info: